Capitol Pest Management was asked to participate in the replacement of the 83 year old Lardo Bridge in McCall Idaho, February of 2014. This project was an amazing opportunity, and we were honored to be a part of it. Our part of the project consisted of removing all abandoned swallow nests, and then wrapping the bridge in netting to keep the swallows from nesting on the bridge structure that spring.
Our team; Bob, Chris, and Tracy endured piles of snow and intense winds on top of the old Lardo Bridge.
First we removed every single mud nest that was left behind by the swallows.
Side note: Swallows are federally protected (they are not endangered), so removing the nests in the winter (after the nests were abandoned by the swallows) was the wisest decision.
Then we installed a tightly woven mesh fabric to the base and pillars of the bridge. This wrap kept the swallows from nesting on the bridge until the bridge could be removed and the new bridge could be installed.
This project was a complete success. We completed before schedule, well within budget and the best part was that the swallows did not nest on the bridge during construction, allowing the Idaho Department of Transportation to remove the bridge without delay.
The new bridge that stands there now looks marvelous and the swallows have really taken to it.
Special thanks to Tracy Lee of Hidden Valley Construction, his attention to detail and hard work was much appreciated! And Alpine Pantry… Kept us warm with a great cups of Joe! 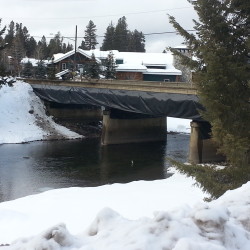 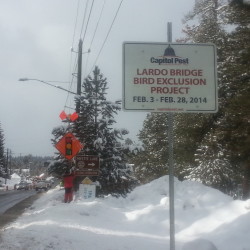 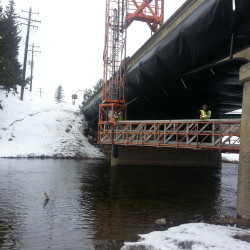 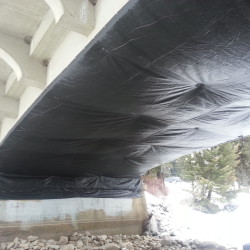 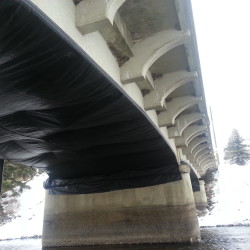 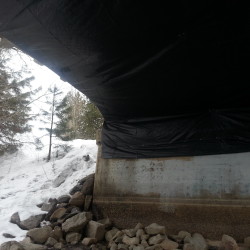 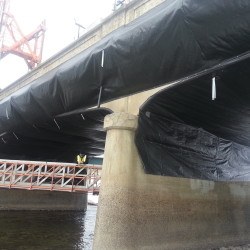 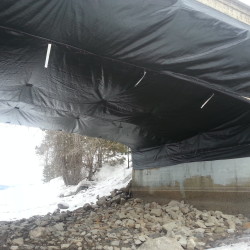 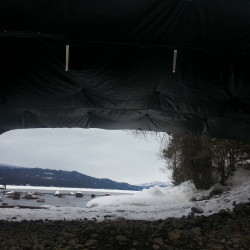